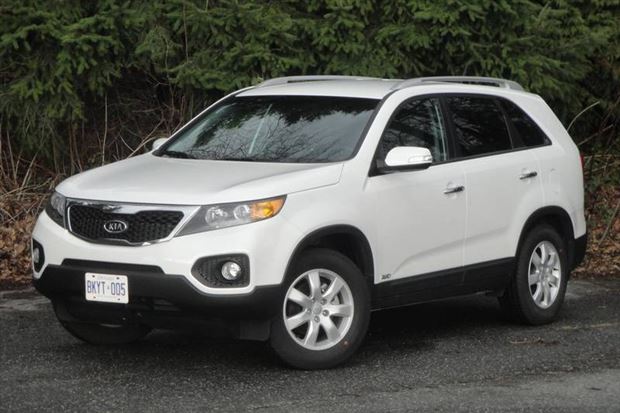 Review and photos by Greg Wilson

Though it’s not as well known as the Ford Escape, Honda CR-V, and Toyota RAV4, the Kia Sorento with the base four-cylinder engine has some good things going for it: namely, a competitive price, a roomy cabin, comfortable highway ride, class-leading horsepower (191), high level of standard equipment, and the best warranty in its class. Oh, and it’s on Consumer Reports “Recommended” list.

Positioned between the Sportage and the recently discontinued Borrego, the Sorento was completely redesigned in 2010 as a 2011 model, and shares similar vehicle architecture with the current Hyundai Santa Fe (not the upcoming 2013 model): a unit body design with a fully independent suspension.

Today’s test vehicle is a 2012 Sorento LX AWD with the four-cylinder engine. Though it now has class-leading horsepower among four-cylinders — 191 hp at 6,300 rpm and 181 lb-ft of torque at 4,250 rpm — the Sorento’s fairly hefty curb weight of 1,782 kg (3,929 lb) means that it isn’t the quickest CUV in its class: 0–60 mph (0–96 km/h) takes 10.4 seconds according to Consumer Reports. The Honda CR-V, which has 185 horsepower and weighs 228 kg less does 0 to 60 in 9.2 seconds. However, the Sorento’s four-cylinder engine is surprisingly smooth and quiet on the highway and fuel economy is comparable with many compact CUVs, despite the Sorentos heavier curb weight. The Sorento LX AWD I4 is rated at 10.1/7.1 L/100 km city/highway. I registered 10.5 L/100 km on the trip computer’s fuel consumption readout after a week of mostly urban driving.

Because it has a longer wheelbase and wider track than most compact CUVs, the Sorento feels more substantial going over the road, providing a smooth highway ride and stable handling. On rough pavement, however, the ride is quite stiff. Driving in the city, the steering requires little effort and the Sorento is easy to park, although its 11.6 metre (38 ft.) turning circle is a bit wide for U-turns. It’s a tall vehicle, so the driver sits up fairly high and visibility is good — a rear wiper with an intermittent speed is standard.

The all-wheel-drive system is almost invisible, but in winter, should you get stuck on an unplowed side street or a driveway snow pile, a handy centre differential lock can be activated by pressing a button on the dash. It provides an even 50/50 front/rear torque split to assist traction and help get you out of trouble. The Sorento’s 18 cm (7 in.) of ground clearance also helps when navigating unplowed streets. I should also mention that the Sorento features black plastic cladding all the way around the lower portion of the body. This not only hides splash marks but protects against stone chips – finally a CUV that’s not just built for the mall!

Greg Wilson is a Vancouver-based automotive journalist and contributor to Autos.ca. He is a member of the Automobile Journalists Association of Canada (AJAC).
Follow Greg