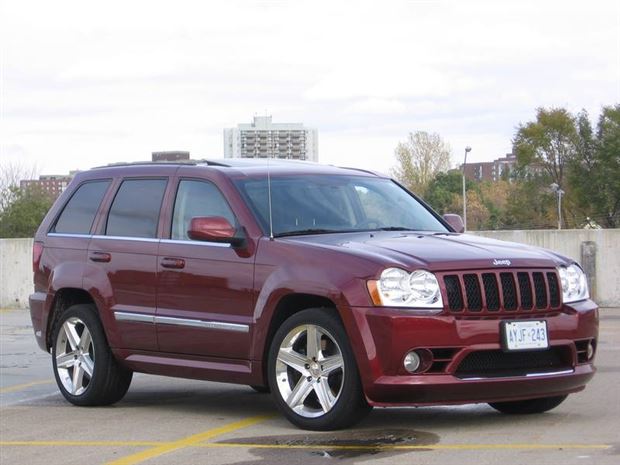 Review and photos by Chris Chase

Discuss this story in the forum at CarTalkCanada

When I picked up this Grand Cherokee SRT8, I glanced at the price breakdown. At the bottom, along with the $1,300 freight charge was a federal green levy of $4,000. This, quite literally, made me laugh out loud. Then, at the end of the week, I filled the tank. I had driven about 325 kilometres and used 65 litres of premium unleaded, which worked out to an average fuel consumption figure of 21 L/100 km. In other words: this Jeep sucks gas.

But saving fuel isn’t what Chrysler’s SRT (for “Street and Racing Technology”) team is all about. This group has created some impressive vehicles since in the past few years, but this Jeep is the first SUV to wear the SRT badge.

The Grand Cherokee is usually a capable off-roader, but this one flips the bird at dirt trails and rocks, preferring to mark its territory on paved surfaces. While all-wheel drive is standard, the 20-inch wheels, low-profile tires and aggressive bodywork make off-road adventures a definite no-no.

That’s okay, though. While your buddies in the Wrangler are bashing over rocks and fallen trees, you’ll be out-gunning many sports cars in a vehicle that looks like it has no business doing so. Under the mostly stock-looking body is a 6.1-litre V8 (the same one found in SRT versions of the Dodge Charger and Chrysler 300) making 420 horsepower and a firmed up suspension that allows this truck to handle itself unlike any other SUV. The downside is that, while this is one fun truck to fling around (best done carefully with performance tires in temperatures hovering barely above zero in mid-November), the ride is quite harsh. The big wheels and tires only make this worse, and the wide rubber is very sensitive to irregularities in the pavement, so uneven roads will tug the wheel around a little.

Hammer the gas from a stop and the truck lunges forward, thanks to the drive-train’s ability to funnel power to all four tires. Think the exhaust sounds badass from inside? It sounds even better from the outside. The centre-exit exhaust, however, pretty much ixnays any possibility of installing a trailer hitch, so forget towing.

The laws of physics state that for every action, there is an equal and opposite reaction; in the Grand Cherokee SRT8, this comes in the form of the large Brembo brakes, which halt the fun in short order. As strong (and as necessary) as these binders are, they’re touchy. Same goes for the throttle: ease into the Go pedal gently if you don’t want every Tom, Dick and Harriet to think you want to race to the next light. One curiosity was how long it took the engine to get up to normal operating temp. Most cars do so in less than fifteen minutes, even in zero-degree weather, while the this big V8 barely crawled up to temp in that time.

If you are indulging your need for speed, you might appreciate the 300 km/h speedometer, but it’s marked in 30 km/h increments. So while 60 km/h is indicated, 100 isn’t. It’s not a big deal, but hey, 100’s common in these parts. Working a digital speed readout into the instrument cluster would be a welcome addition.

If you haven’t spent much time nosing around inside the latest, third-generation Grand Cherokee, you might be surprised to find that there’s really not a lot of space in the passenger compartment. Headroom is fine, but lots of front-seat footroom is sacrificed for the drivetrain; rear seat legroom is at a premium, too. At least cargo space is generous: while the load floor and liftover are high, the space is nicely squared off and the rear seats fold almost completely flat.

The front bucket seats are special SRT8-specific chairs, with prominent bolstering. They’re comfortable, and – this is a nice touch – even the passenger gets an adjustable lumbar support. If space for people isn’t terrific, small item storage is better, with a good-sized covered console bin, two cupholders and a few other open compartments in the console.

The driver doesn’t get a telescoping steering wheel, but in my tester, a $2,435 SRT Option Group added adjustable pedals, which will be just as useful for most drivers.

My truck also had the $2,540 navigation system, which comes bundled with a six-CD changer and a rear back-up camera. The camera was handy, but the nav system was a pain to use, thanks to its lack of a touch screen interface. These options, plus a $1,050 power sunroof and a rear-seat DVD system for $1,190, made for an as-tested price of $57,295, not including freight or the wicked green levy. (My tester was a 2007 model, but the MSRP remains unchanged for 2008.)

The climate controls – an automatic set-up courtesy of that SRT option group – are easy to use, and the dash-mounted ignition switch is something I wish more automakers would design into their cars and trucks. One ergonomic gaffe are the inside door handles; these are mounted low and had me looking twice even after a week of driving.

But such practical considerations probably don’t matter much to the gang who put this truck together, nor do buyers likely care much. This much performance and visual appeal for a $50,000 starting price is pretty impressive, but the SRT8 will really only make sense to the few people who decide that an SUV that behaves like a sports car is the vehicle for them. Others might wonder – what the heck is the point? 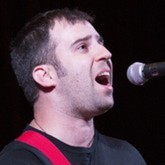