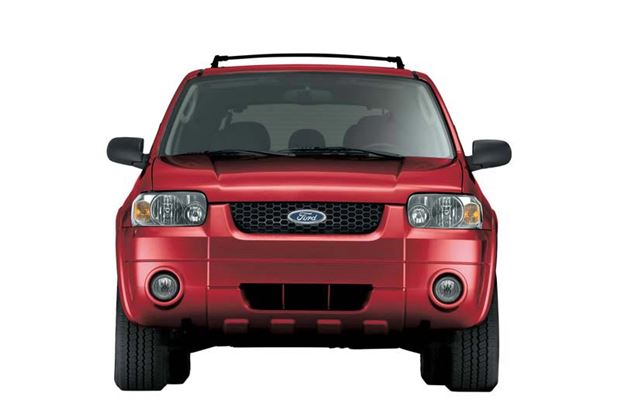 For 2006, the Ford Escape and its hybrid version undergo a few small changes. On the Escape, a V6 badge has been added on applicable models; Quick Brake Assist has been deleted; two new exterior colours come in, Blazing Copper Metallic and Titanium Green Metallic, while Gold Ash Metallic heads out; there’s a new Audiophile sound system with six-CD to replace the Mach 300 system; the XLT and Limited receive a full-size spare; and the XLS Upgrade Package and XLT No Boundaries package are no longer available.

The Escape is also sold at Mazda as the Tribute, but only equipped with a gasoline engine.

The gasoline-only Escape is offered in several variations. The XLS uses a 2.3-litre inline four-cylinder and comes with a five-speed manual that can be optioned up to a four-speed manual. With the manual transmission, it’s front-wheel-drive only; with the automatic, it can be ordered in FWD or all-wheel-drive. The FWD XLS is the only model available with a standard transmission.

The XLT comes with a 3.0-litre Duratec V6 engine, strictly with an automatic, and can be ordered in FWD or 4WD. The top-of-the-line Limited also uses the V6 and comes with 4WD only. The 4WD is an on-demand system: it powers only the front wheels under normal conditions, but when it senses slippage, it transfers up to 99 per cent of torque to the rear wheels.

The Hybrid, which comes in a single trim line, uses a 2.3-litre Duratec inline four-cylinder engine, mated with an electric motor. The sole transmission choice is an electronically-controlled, continuously variable transmission (CVT). It can be optioned with the 4WD system, and comes with all the expected convenience items, including power windows, locks and mirrors, 16-inch wheels, roof rack, air conditioning and a six-way driver’s seat.

It’s a “full hybrid”, which means that its electric motor teams with a four-cylinder gasoline engine for higher performance; it has an engine-stop, which shuts the gasoline engine off when it’s not needed (such as when idling at a light); it has regenerative braking to recover and store energy that would otherwise be lost as heat; and under certain situations, it will move under its battery power alone.

The system works without any input from the driver, and doesn’t require the vehicle to be plugged in. The electric motor is used to start the engine, rather than a conventional starter. Although its horsepower and torque ratings are low on paper, its acceleration is similar to that of the V6, as the gasoline and electric motors run together. The fuel savings are highest when the vehicle’s used in-town, and its stop-feature and battery power eliminate gas wasted when sitting in traffic (it actually gets better mileage in the city than on the highway). Three provinces offer sales tax rebates on the Hybrid: British Columbia up to $2,000, Ontario up to $1,000, and Prince Edward Island up to $3,000.

The gasoline-powered four-cylinder Escape is listless; the smooth-running V6 is the best choice. Handling is good and the interior is comfortable, but fit-and-finish fall short of most comparable Japanese compact SUVs.